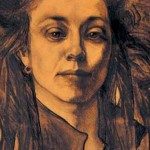 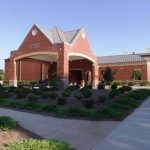 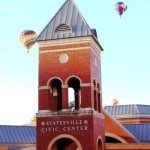 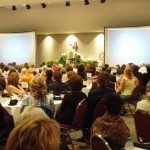 The influence of ancient stories and myths can be detected in much of Statesville’s fresco, entitled “Images at the Crossroads”. Mythology has great respect for the goddess of the crossroads as she has the power of knowing what’s ahead. She is usually portrayed with three heads or faces, signifying her ability to know what is going on in every direction. The maiden stands at the heart of the fresco in the foreground. Her hand to her breast is an ancient signal of greeting – a sign of arrival.

It is no coincidence that Ben Long chose this image to serve as the inspiration for Statesville’s fresco. Statesville is a city that at a crossroads of two major interstate highways.

All the elements of what happens when paths come together and cross can be found in the medley of vignettes painted as a backdrop to the guardian of the crossroads. No one image is meant to overshadow another. It is hoped that observers will have their own response to the figures and faces in the environs of the maiden.

About the Artist
Born in Texas in 1945, artist Benjamin F. Long IV grew up in Statesville,  and studied at the University of North Carolina at Chapel Hill and the Art Student’s League in New York.  He later lived in Florence, Italy, where he began his apprenticeship under Maestro Pietro Annigeni.  He has since achieved international fame as a master of both true fresco, drawing and oil painting.  His excellence in the field of fresco painting has resulted in worldwide commissions, including France and Italy and several sites in North Carolina.

The Fresco Process
With a fresco, there are many steps before the first stroke of paint is placed on the wall.  The scratch coat is made up of partially slaked lime combined with sand.  The preliminary drawings were sketched and then refined.  Individual studies of certain elements of the painting – such as portraits – were produced to help in the artist’s development of the original composition.